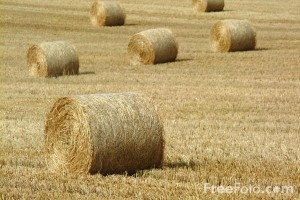 Hay is the most important part of your rabbit’s diet and should make up approximately 70% of it. It is high in fibre, which keeps the digestive tract moving, helping to prevent blockages and stasis. In addition, hay helps to sustain healthy teeth by reducing the risk of molar spurs. It also allows your rabbit to satisfy his urge to chew.

Because alfalfa has more protein, calories and calcium than adult rabbits generally require.  Adult rabbits should be given an unlimited amount of grass hay, such as Timothy, Brome or Orchard grass, etc, to graze on each day. Rabbits up to approximately 7 months old can be fed unlimited alfalfa hay, although grass hay can be fed, too.

Good hay should be green, rather than brown, and smell like grass. Never feed moldy hay because it can make your rabbit seriously ill. Moldy hay may contain white dust, or black and/or white spots on the bale. If you drop the bale and a lot of white dust flies up, it could be a sign of mold. Thistles and other weeds should be picked out of the hay before serving, because some weeds, such as milkweed (a thick, fibrous stemmed plant with broad elongated leaves) are toxic.

Hay can be purchased at any pet store. It is more economical, however, to find a farmer who specializes in growing hay for horses. If you have three or more rabbits, you will use a bale pretty quickly. Hay grown for cows is generally not suitable for bunnies as it will contain more alfalfa.

Where can you find hay in your area?
It isn’t always easy to know which farmers grow hay, especially when you live in the city. Farmers in various counties across Ontario describe the type and size of bales of hay that they are selling in local papers or on-line. If you are lucky, you will find a farmer in your county that is selling small square bales that you can purchase. If a whole bale is too much for your bunnies, consider purchasing a bale and sharing it with other rabbit owners in your area or with your local shelter. Try calling local stables that board horses…most are willing to sell a blae here and there.

Hay: Understanding the basics and the many types available

The most important part of the house rabbit diet is an unlimited supply of grass hay which provides essential fibre as well as proteins, vitamins, minerals and carbohydrates. (Dr Susan Brown, About Nutrition in Small Mammals).

There are two general classes of hay: legume or lucern and grass.

Legumes have a different root and leaf structure and contain more calcium and protein than grasses. Examples of legume hay are Clover and Alfalfa. Because of the higher protein content, which can lead to obesity, legume hay is generally reserved for lactating rabbits or young rabbits, under seven months of age.

When we think of grass hay, we typically think of Timothy because it’s the most common grass hay sold at local pet supply shops. But grass hay is any one of approximately ten different types of grasses that are dried and used as animal feed. Examples include Timothy, Brome, Orchard and Oat. 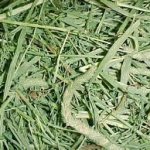 This hay has a similar appearance to timothy but has broken or open “cattail” tips, rather than solid.
The tips tend to be pale brown.

Other types of grass hay:

Varieties in our region include Ryegrass, Kentucky Bluegrass, Brome and Reed Canary grass.

What is first and second cut hay?

The terms first and second cut refer to the number of times that hay is harvested and the maturity level of each cutting within a growing season. In Ontario, we usually have one or two cuttings per year, depending upon the region, varieties planted and environmental factors such as rain.

The longer hay is allowed to grow before being harvested, the more fibre and less protein it will have. Some rabbits seem to prefer a courser, stalky hay, while others have a preference for softer hay.

A mix of high fibre stalks and tasty leaves should be offered in unlimited supply to encourage the rabbit to graze continuously and enjoy maximum nutritional benefits. Different grasses have different mineral levels, so feeding a variety of hay helps to reduce the risk of mineral deficiencies, especially in rabbits that are fed a pellet-less diet.

Generally, hay that is grown for horses can be fed to your rabbit. Good hay should smell sweet or like fresh grass. It should be low in weeds and, although colour varies with the type of hay, it should be green to greenish-grey in colour.

Excessive dust or hay that does not smell sweet may indicate mould. Do not feed your rabbit mouldy hay.

When properly cut, dried, and stored, hay can remain in good condition for up to a year. Proper storage involves keeping the hay dry, away from vermin, out of direct sunlight, and in a container that allows for some airflow. If perfectly dry, small amounts can be stored in air-tight containers. Damp or wet hay that is stored in air-tight containers can ferment and quickly become mouldy. If storing hay indoors, cardboard boxes, paper yard waste bags, or large Rubbermaid-type bins with holes punched in the side work well. If storing hay outdoors, hay should be stored on a wooden pallet or otherwise off of the ground and be loosely covered to protect it from dust and direct sunlight.

If your rabbit is not enthusiastic about the grass hay you are feeding, and you know teeth problems are not an issue, you may want to introduce a new type or “brand” of hay. Also, try feeding hay before feeding other food sources, such as vegetables or pellets.

Entice your rabbit by adding dried herbs into a handful of hay, or put hay in baskets, tubes, cardboard boxes, or paper bags to promote foraging behaviour at meal-time. 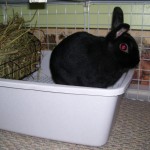 Rabbits like to eat while they defecate so add hay to one end of the litter box. To prevent the hay from becoming soiled and wasted, attach a hay bin close to the litterbox area, so the rabbit can sit in the box yet easily reach their hay.

If your rabbit is still not interested in grass hay, you may include a small amount of alfalfa hay, if your rabbit’s diet does not include alfalfa-based pellets, and your rabbit is not overweight or suffering from bladder sludge, bladder stones, or soft stool. When given the choice some rabbits find alfalfa more palatable and may leave their grass hay untouched.

Purchasing Hay
There are many sources for hay and factors such as availability, affordability and package sizes, which may determine the hay you buy. Large pet store chains are often limited to only alfalfa or timothy hay in small bags that are not economical, especially if you are feeding more than one rabbit. Look in your yellow pages for independent retailers, tack shops, or specialty pet food stores that may carry a larger hay selection.

A farmer in your area that owns horses or supplies hay to riding stables may be willing to sell a small bale for less than ten dollars. This can be very economical if you havestorage capabilities, or a local shelter or other bunny owners in your area to share what you cannot readily use. Some farmers can be very accommodating if rabbit owners work out a reasonable schedule to pick up hay; otherwise it can be an inconvenience to sell such a small quantity on a regular basis. You may find a farmer in your area advertising small bales for sale in the classifieds or on www.hayexchange.com. But remember, not all hay is good quality and it may be difficult to determine the condition in the centre of an unopened bale.

If you have limited storage space available and prefer the convenience of online shopping, there are hay companies that advertise good quality hay grown specifically for small animals. The hay is available in a variety of sizes and shipped right to your door. For example: U.S.-based Oxbow Hay Company (www.oxbowhay.com) or American Pet Diner (www.americanpetdiner.com).

Always remember that hay is a natural product. This means that depending upon the weather during the growing season and harvest practices, the same type of hay may look different from year to year, and may even vary from different sections of the same field. This means that your rabbit may suddenly like – or even dislike – a source of hay. With this in mind, the ideal kind of hay for your rabbit is the kind of grass hay that he or she will readily eat in significant amounts.