Incisor malocclusions (where the occlusal, or biting surfaces, do not match) typically are seen in rabbits in two different instances.
First, in young rabbits born with facial abnormalities or suffering early facial trauma, and second, in older rabbits suffering with molar malocclusion.

All rabbits have two upper and two lower incisors, as well as two small peg teeth that grow in behind the upper incisors. As all teeth in the rabbit’s mouth are open rooted, they grow continuously throughout life, requiring proper contact with the opposing teeth for normal wear. Consequently, any rabbit suffering from malocclusion is affected with a life-long problem. Overgrown, maloccluded incisors can curl inward, perforating the upper palate, penetrating lips, tongues, cheeks and nostrils, and prevent the rabbit from eating. When rabbits are unable to eat or drink, life-threatening metabolic changes rapidly ensue.

In rabbits with maloccluded incisors, incisor grinding offers a temporary solution, allowing the rabbit to eat.

Please note the key word: grinding.
Clipping can be painful to the rabbit, and runs the risk of splintering the remaining incisor below the gumline. 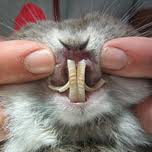 Splintering can set the rabbit up to develop a tooth root abscess, which can in turn become a life-threatening problem. Please, do not clip, or allow anyone else to clip you pet’s incisors! Grinding offers a quick, safe way to level out maloccluded incisors.

For young rabbits affected with incisor malocclusion, a more permanent solution can be offered by way of incisor removal. Under general anesthetic, all incisors and peg teeth are removed. As long as the roots are also extracted intact, the problem teeth never regrow. In the occasional instance where a root breaks, it can later be extracted once the tooth regrows beyond the gum line. Pet rabbits do not need the incisors for survival, and rapidly resume normal activity and diet.

Finally, older rabbits presenting with changes to the occlusal surfaces of their incisors are an alarm flag for molar problems. In this instance, evening out the incisors is like masking a symptom: there is a more serious problem at hand, requiring a thorough evaluation of the oral cavity.

When Teeth turn to Tusks – by Diana Petty

Runny Eyes, Runny Nose. What do They Mean?-by Dana Krempels

Gilly-Monster: The tale of a toothless bunny

Before I adopted Gilly-Monster, I had read about malocclusion, but I hadn’t really seen any pictures.

A lot of information said things along the lines of: “before adopting any rabbit check for possible health problems, like malocclusion”. In other words, this is not the kind of rabbit that you should be adopting!

One day while buying cat food at a pet store I noticed a young rabbit at the back in a cage. His cage floor had a lot of runny droppings in it. The pet store employee explained that he had diarrhea and they were trying to treat him by putting antibiotics in his water. I suggested they try giving him lots of hay.

He was a pathetic looking little guy – brown, lots of scabs. He had odd fur which looked as if it had been chewed off (as it turns out, it had been – he’d been beaten up by other bunnies). I asked if I could pick him up, and when I did, I noticed that there was a large mat under his chin. Looking more closely, I noticed that it was tangled around his bottom teeth. I also noticed that his bottom teeth had grown into his top lip, and one of his front teeth had grown sideways out of his mouth.

I was absolutely horrified. I couldn’t even imagine how this bunny had been able to eat anything at all. He was terribly skinny, so it had obviously been a struggle for him. I showed the pet store employee his teeth and she said that he’d have to go back to the breeder. I didn’t want to ask what the breeder would do, so I became the new owner
of a scabby, cranky, chewed up bunny with very bad teeth.

I brought him home in a cardboard box, and offered him all kinds of tasty bunny foods – alfalfa, timothy, mushed up pellets, bits of lettuce and parsley, but he ignored them. I tried clipping the mat of fur wound around his bottom teeth to free up his mouth

somewhat, but he became extremely agitated and I was afraid I’d cut his skin. First thing in the morning I brought him to a local vet . They clipped his teeth, cut his matted fur and freed up his mouth. When I tried to pet him, he bit me. I was so proud of him! After his trip to the vet he dove into the timothy and practically ate all day. His runny poops immediately cleared up. Not from the timothy, but more likely because he was no longer suffering from the pain of his malocclusion.

I booked an appointment for two weeks with a vet who had a lot of experience treating rabbits to have his teeth assessed further. Now that his teeth were clipped I was able to look more clearly at them. He had only one front incisor, growing sideways, which probably accounted for the overgrown bottom teeth. They had nothing to grind against and wear them down. Within the two weeks Gilly-Monster’s teeth had grown to the point where they needed to be trimmed again.

My new vet, however, used a dremel tool to trim the teeth. She explained that clipping (with cutters) often results in invisible fractures of the tooth, which can provide a pathway for bacteria to enter and may result in in infections/abscesses of the jaw, which are notoriously hard to cure. Trimming the teeth with a dremel tool needs to be done by someone with experience, since any little slip could result in injury to the rabbit. This is not something to be tried at home! Since Gilly-Monster’s teeth had grown so quickly I decided to have them removed; otherwise we’d be looking at trimmings every two weeks, and a long car drive to the vet. I thought the surgery would be far less traumatic and invasive in the long run.

Incisor removal surgery in rabbits is more complicated than simply pulling the teeth. Because rabbit’s teeth are constantly growing the socket needs to be scraped after the tooth is pulled to ensure there is no regrowth. Even when done by an experienced vet, there is sometimes the chance of regrowth. Naturally I was quite nervous about the whole ordeal, especially since I was afraid that he wouldn’t eat post-op and would have to be force fed. As it turns out, about two hours after the surgery Gilly-Monster ate a huge pile of timothy. I had brought in some hay already cut into 2-3 inch-long pieces because I had read that initially it would be easier for him to pick up small pieces with his lips. Because his teeth were removed, he compensated by picking up food with his lips. After I brought him home I grated carrot for him, and tore up his veggies into little pieces, but soon I didn’t need to. I think since Gilly-Monster spent the first few months of his life struggling to eat with his awful teeth, he was quite determined to eat despite all odds. From day one of his surgery I had no trouble getting him to eat anything at all. Sometimes I would notice him struggle with his parsley. It would fall out of his mouth and he’d have to pick it up repeatedly, but he didn’t appear to be frustrated at all by this.

The vet put him on 28 days of Baytril post-op to prevent any chance of infection, because the tooth sockets are left open to heal there is a possibility of bacterial infection. All in all I’d have to say the whole procedure went much more smoothly than I had even hoped it would. I was worried that he wouldn’t be able to bite and inturn he’d lose one of his means of communicating (he never drew blood, but he did like to nip). But he continued to bite me with his gums and never seemed to notice that his teeth were absent. I still squealed when he gummed me because I didn’t want him to feel like he was no longer the tough bunny that he used to be.

With his teeth problem cleared up he was now able to groom himself, which he hadn’t been able to do before, and he groomed himself incessantly. His scabs healed, his fur grew out and he turned into a stunning French Angora – golden fur with dark brown face, ears and feet. Gilly was the stereotypical ugly duckling.

For him surgery was the best option because of the rapid regrowth of his teeth. Other rabbits with less severe malocclusion may need trimmings only every few months. I’ve heard stories of rabbits whose malocclusion was solved with only one trimming – something had caused the teeth to grow improperly, but after the initial trimming the teeth grew straight. One person I’ve recently met has been bringing her rabbit in for trimmings every 6 weeks for the past three years with no problems. He doesn’t get stressed by the procedure, so she feels this is the best choice for him. Every case is unique, and needs evaluation by a vet experienced with rabbit teeth problems. Incisor removal may not be the best choice for every rabbit depending on the circumstances.

A trial of trimming the teeth is definitely a wise choice. However, should incisor removal become a necessity the rabbit can quite rapidly adjust, in my experience. The total cost for Gilly’s surgery was about $250 and he was neutered at the same time, so when weighed against the cost of monthly or weekly trimmings, its quite cost effective as well.