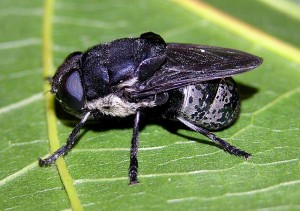 The Bot Fly or Cuterebra (Cute-a Ree-bra) is the larval form of a small fly like insect.

The Bot Fly larva forms a pocket under the hosts skin, that grows as the larvae matures, called a “warble”.
These warbles are most commonly found at the mouth, neck or flanks of the rabbit.

Parasitic in nature, the Bot fly will deposit its eggs on a host such as a rabbit, or on an intermediate host such
as a house fly or mosquito, transfering its eggs when the fly or mosquito lands on the hosts body.
Bot flys may also lay their eggs on plants and surfaces near animal burrows/homes where they are then transfered
to the host as it passes by.
These eggs then hatch and enter the host animals body by way of a wound or by burrowing into the hosts body.
The Bot Fly may also be ingested through plant material and migrate its way to the dermal layer where the same process
then occurs. 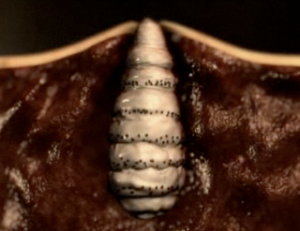 stage of development.
The warble is typically oblong.
The larva will cut a hole in the top of the warble forming a darker spot (warble pore) to breathe through, then uses it’s
mouth hooks to secure itself.
The Bot Fly larvae uses its warble much like other insects would use a cocoon to develop.
It does not in fact digest the hosts live tissue, but digests the tissue exudate (secretions) of the host.
As the warble grows with the maturing larvae the warble may occasionally be mistaken for an abscess.

While unnerving and disgusting, it is rarely fatal, and once mature the larvae will crawl from its warble, fall from the host
and develop into its pupae form in the soil.  It causes no more than mild irritation to the host.
More than one warble may form at a time.
The danger in Bot Fly infestation is the likelyhood of infection at the warble site.

We don’t recommend trying to remove Bot Fly larvae on your own and recommend the bunn be brought to a veterinarian. 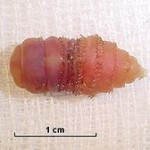 If the larvae is crushed in the removal process it can cause an anaphalactic (severe allergic) reaction leading to the death
of the bunn.
A vet is better equipped to fascilitate its removal.

By week 3-4, the larvae matures and drops to the ground to pupate.
The animal is left with a hole where the larvae was living.  Most of the time the wounds will heal requiring no treatment.
However, at times these pockets may become infected and require treatment.
The animal heals and there is little evidence of warble infestation.